You can call this film director Jack Baxter’s vanity project if you like, but in any case “The Last Sermon” mirrors the kind of odyssey that will make you cheer on its filmmaker and hope that he will gain the insights he seeks. Baxter is a New York resident who was injured in the terrorist bombing of Mike’s Place in Tel Aviv in April 2003. Three people were killed and many were injured. Baxter walks around now with a cane, partially paralyzed from the suicide bombing which left piece of shrapnel in his body.

Baxter, a slim fellow standing six feet two inches who has a thick mess of curly white hair and a Bernie Sanders accent, wants to know why radicalized Islamists have actually gone against the teachings of the Koran. Just as one of the principal beliefs of Judaism is “treat others as you want to be treated yourself,” in other words we are all equal, the prophet Mohammad preached in the year 632 his last sermon before a multitude of followers. He said, “All mankind is from Adam and Eve. An Arab has no superiority over a non-Arab, nor does a non-Arab have any superiority over an Arab; a white has no superiority over a black, nor does a black have any superiority over a white. Do not do injustice to others, therefore do not do injustice to yourselves.”

Yet the world has suffered through a plethora of attacks by Muslims who apparently did not read or did not agree with the prophet, our own case here in the U.S. highlighted by 9/11, when almost 3,000 Americans were murdered when three separate aircraft aimed themselves at New York’s World Trade Center, the Pentagon, and the Capitol building.

The doc starts in Jerusalem, introducing Jack Baxter and Joshua Faudem outside Mike’s Place. From there the crew traveled to Macedonia, Greece, Serbia, Hungary, Germany the Czech Republic, France, and England. Playing the harmonica to get the attention of refugee communities in countries that have allowed Syrians and Afghans safe harbor, he discusses his quest with Muslims and others whom he meets on the way, most sympathizing with his point of view that Islam is a religion of peace. As one fellow tells him, jihadists are little more than murderers, clothing their actions with the material of religion. That in one sentence should satisfy Baxter, an insight that even I could have told him had he interviewed me. One of the refugee areas had a large sign with a picture of President Trump, a circle and a diagonal line drawn through him as though to call him their enemy—which he is.

The only lip he gets is from a far right presidential candidate in Prague, who insists that there is no way the Islamic culture could find a home in her country, that she does not mind a handful of refugees already there nor does she draw back against doing business with Islamic countries. But it is quite clear that she has no use for them in her Eastern Europe domain. In that she reflects the view of the current far-right president of Hungary, one of several authoritarian rulers that our own president admires.

The film picks up near the conclusion when in London, Baxter, unsuccessfully trying to contact the relatives of one of the Tel Aviv bombers, gets literally up on a soapbox in Hyde Park to denounce terrorism before a handful of people, curious about a New Yorker in suit and tie who expresses a point of view with which nobody there can find fault. Then, in a tense meeting with a politician who appears not to take a strong stand against jihadism, Baxter cries out, “They’re murderers! Murderers!” as he at first steps away from the man as though to protect both of them from a potential fight, then returns a few paces to cry “They’re murderers!”

This doc, in its cinema verité style, is not unlike Jack Baxter’s previous “Blues by the Beach,” about a live music blues bar by the beach in Tel Aviv called Mike’s Place. The aim is to show there is more to the Middle East than seemingly endless war and terrorism. Ironically enough, that is the very place that became the scene of a suicide bombing. 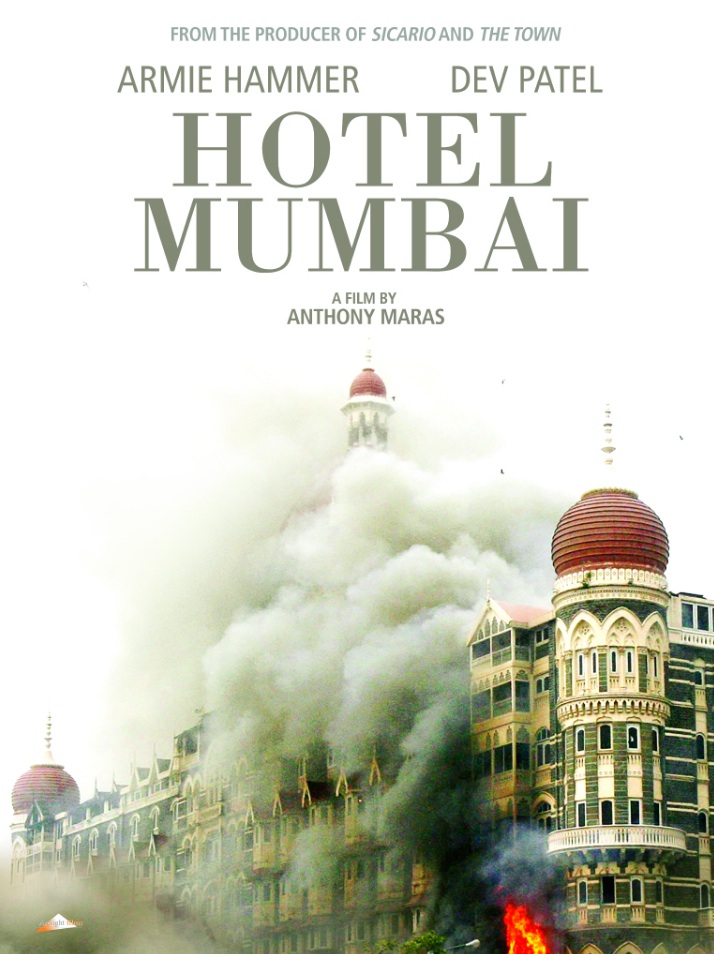 If you don’t fancy biting your nails down to your cuticles, you may not want to venture forth to “Hotel Mumbai.” While there are no back-stories to speak of in this dramatic treatment of a terrible, mindless attack in 2008, the action scenes look authentic, the entire cast are game, the faces exude fear, and best of all the archival films from 2008 that editor Peter McNulty snap in at key points in the narrative look at though they are a seamless part of the action. While the Muslim jihadists from Pakistan, some of whom sneaked into Mumbai by small boat, coordinated an attack on several points in India’s largest city, Anthony Maras centered the action on the Taj Mahal Palace Hotel, a world famous spot of pure luxury in a mostly poverty-stricken country.

Director Maras, whose 2011 short “The Palace” covered military action by Turkish forces in Cyprus in 1974, and whose “Azadi” in 2005 follows the plight of an Afghan schoolteacher and his asthmatic son who escape their oppressive Taliban homeland in search of a new life in Australia, is obviously in his métier with “Hotel Mumbai.” Outdoor scenes on the sidewalk around the Taj Hotel are filmed on location, though the action taking place inside the hotel is filmed on a set in South Australia. (The team stayed at the International Hotel in Adelaide.)

Perhaps what Maras and co-writer John Colee want to emphasize thematically is the way that the heroes among the hotel staff—people who have been trained to consider all guests as gods—mostly stayed put to help those on the premises to avoid being shot by the young Pakistan men who carry their destructive automatic weapons. By contrast, the local police force despite their bravery in confronting the thugs are sporting nothing more potent than simple pistols, yet they rise to the occasion, entering the premises in search of the mass murderers. During a considerable part of the story, Maras’s cinematographer, Nick Remy Matthews turns the screen into a shooting gallery, as the jihadists hunt down every guest, even spending considerable time to target specific people, namely high profile Americans. Of course some in the cast are elevated by their individual heroism, including chef Hemant Oberoi (Anupam Kher), Arjun (Dev Patel), a Sikh whose turban freaks out one of the guests, David (handsome Armie Hammer) and his wife Zahra (Nazanin Boniadi) whose principal aim is to protect their new baby. Jason Isaacs as Vasili is with the Russian special forces, turning in a dramatic move near the conclusion when he is tied up, refusing to show the slightest cowardice by spitting on the jihadist who has the power to maim and kill him on the spot.

Much of the action is handed to those playing the jihadists, who to a man are willing to die and become martyred for Allah. None expect to get away alive from the action, particularly when the Indian special forces, the only unit capable of ending the war, had to transport themselves from New Delhi, eight hundred miles from the action. The assailants—young men who could not be more than twenty-five years of age and played by Amandeep Singh, Suhail Nayyar, Yash Trivedi and Gaurav Paswala, casually make the rounds shooting straight ahead, hitting people in the back as they try to flee, even firing straight down to kill those on a floor below. One act of heroism aside from the general help given to the guests by members of the hotel staff finds two receiptionists from the Taj asked at gunpoint to call one of the rooms to get guests to open the doors. When they refuse, they are summarily executed.

More sophisticated moviegoers will want more than a re-creation of the events, however artistically executed. Are the principal characters merely of two dimensions, set up to represent in turn a father eager to save his wife and child, a degraded Russian opting to ask two young women to be sent to his room, a head chef serving as the chief of the rescue team? Perhaps there was little time for this since much action has to be covered, giving the movie audience the real feeling of what it means to be literally afraid for your life when you figure that the chances are that this is your last day on earth.