I think that the best way for a political documentary to get its points across is with humor. In that way, a filmmaker can undercut potential opponents who would be so entertained that even they would appreciate what they are seeing. Think of Michael Moore’s exposing of political foibles in “Fahrenheit 11/9,” in “Bowling for Columbine,” and especially in “Sicko” where Moore attacks the sorry state of American medicine, how it provides great benefits only for those who can afford expensive insurance or have terrific jobs like members of Congress and the Supreme Court. But “#Unfit: The Psychology of Donald Trump” is one major exception to the humor rule. Dan Partland’s doc is so hard-hitting, so exquisitely edited, with so many people who are tops in their fields making major points against Trump, that this would probably be the year’s best non-fiction offering. 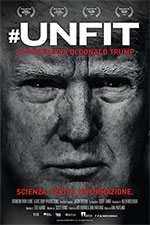 Not that it tells us anything new! That’s not what is so important. If you are politically woke, if you follow the news channels, especially the most truthful ones (i.e. those that Trump brushes aside as deliverers of fake news), you will not be surprised by the revelations here. The great benefit is that Partland hits us in the guts, drums in the danger that our republic is facing as we head down the road to fascism, and how fascistic leaders are taking power in countries as diverse as Brazil, the Philippines, Poland, Hungary and Turkey. (Duterte in the Philippines has no problem advocating the execution of the country’s three million drug pushers and addicts.)

But wait! There is some humor here after all. What you may remember most is a comment by Anthony Scaramucci, who lasted all of eleven days as Trump’s flack because his followers in the White House could not forget that he voted for Hillary and that he antagonized them, a hedge fund winner who could not adapt to the requirements of the political world. “Trump is not a racist,” he announces, to which the audience for the doc wonders whether he is sneaking in support for the President. “He treats everybody like shit.” Good one. Think about that. Is it true? We hear that he provides a toxic work environment, that those he praises one day he trashes the next. He thinks the world of Sean Spicer, Reince Priebus, John F. Kelly, Kirstjen Nielsen, Steve Bannon (good riddance), John Bolton, H.R. McMaster and scores of others. He changes his mind not only about his staff, whose members are fired regularly, but about policy. He announces an attack on Iran but cancels ten minutes before the bombs start falling. 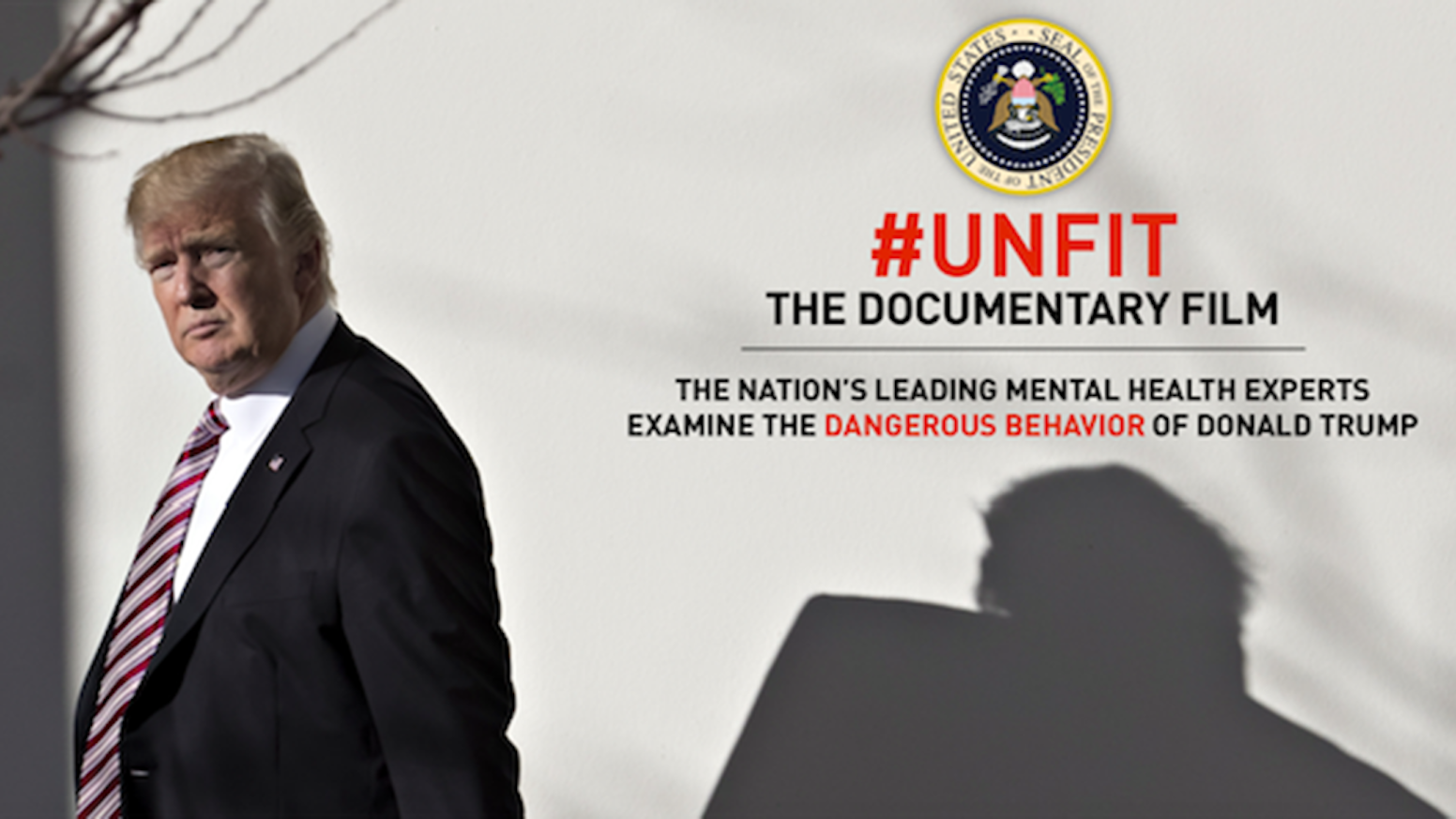 The most damaging accusations, at least in this film, are from psychiatrists and psychoanalysts, who are obligated to remain silent about people’s personalities unless they have seen them and put them on the couch. But there is an exception: shrinks are allowed to go public with other confidential information when they believe a patient is a danger to others, such as when a patient on the couch announces that he is going to go home and kill his girlfriend. (In that case, the psychologist remained silent: the patient went home and killed his girlfriend.)

Trump is like that person, except that as one interviewer notes, his narcissism, his paranoia, his sadism and his anti-social personality are a threat to all of us, not only domestically but globally. When members of the cast talk about the President’s power to unleash a thermonuclear war, we should worry. In fact the accusations against the man in the White House are so incisive that the documentary’s viewers may wonder why he has not unleashed the dogs of war, particularly when he said (he was not joking) that what is the purpose of nuclear weapon if we do not use them?

If you watch the news, think about his speeches. He unloads statements not once or twice, but three times or more. He may use the term “fake news” three times in one speech. By the third time, the crowd believes him. He follows the tactics of other authoritarians around the world like Duterte in the Philippines, Bolsanaro in Brazil, Erdogan in Turkey, to rally the people. One person who knew Trump up close said that he read Hitler’s speeches. No, he is not Hitler, but he uses the same template to sway the population. There exists in this country a broad swath of people, those whom Hillary unfortunately labeled “deplorables,” who believe that they have been ignored by politicians. They went for Trump because he spoke their language, he convinced them that he hears them and that he vows to make the country great again. The wonder is, given his shrugging off of the dangers of the coronavirus and the fact that these people have not done any better economically during his tenure, they continue to support him wildly.

Some time is given over to animations, a particularly good cartoonish one shows an obese man with yellow hair marching quickly to his own drummer. Jane Goodall gets some photographic time studying chimps, noting that while at first they cooperate with one another under a head chimp, eventually the crew become so large that they break into two groups. One group attacks the other, beating the animals to death. Their own kind! Therein lies an incisive metaphor for our polarized society today.

There is one major point that Partland glides over. One man cannot do what Trump is accused of doing. He might have added that Hitler would not be able to kill six million Jews if he did not have enablers; that is, people in various countries as well as in Germany who helped him with that gruesome job. Trump could have been stopped in his tracks if he did not get the political support from a Supreme Court whose votes can be predicted with fair accuracy in advance of any case. Nor could he have had reactionary federal judges appointed if he did not control a Republican majority in the Senate, who, despite previous opinions they may have had about Trump’s inability to lead the nation, now praise him with obnoxious sycophancy. Mitch McConnell is another hypocrite who years ago denied even a hearing for Obama’s choice for a Supreme Court vacancy because he said that a President in his final year should have to wait until after the election. Now, the Senate majority leader notes that in the case of a Supreme Court vacancy during Trump’s last six months, “Oh, we’ll fill it.”

“Oh what a tangled web we weave, When first we practice to deceive.” So said Sir Walter Scott in 1806 in a historical romance novel. Nobody really thinks times have changed. Scott was writing about events in the 16th century and now Merland Hoxha directs his update on the theme using three major players in a piece that you could easily stream on your small screen now that theaters are closed. In his freshman job as writer-director Hoxha, who may or may not be a relation of Enver, hones in on a modern romance which has moments of comedy but is as serious as you can hope to get with twenty-somethings who will interrupt almost any live conversation to pick up a text message or answer a call. Immaturity abounds in “The Departure,” a cute, theatrical piece involving three major characters, one young woman who quickly leaves the screen, and the boss of a company that sells environmentally-friendly equipment.

People lie all the time, white lies to save people’s feelings and the other kind to advance our objectives. This production highlights the machinations of two best friends Nate (Grand Wright Gunderson) and John (Austin Lauer) and the way they and one young woman, Jessica (Kendall Chappell) manipulate one another. The result of the game may turn out to be other than what each had hoped, but perhaps they had fun playing with one another’s feelings, though not without the guilt that should cloud the emotions of anyone but a sociopath.

For all we know, Hoxha may have been inspired by Pierre Ambroise Francois Choderlos de Laclos’ 18th century novel “Les Liaisons Dangereuses” which in a filmed version finds Jeanne Moreau coercing her husband Gerard Philippe into ruining the reputation of pious Annette Vadim. Philippe spoils the nasty plan by falling in love with his intended victim. The ultimate punishment in both the classic study and this lighter version is painful.

Nate is assigned by his grateful boss Bruce (Jon Briddell) to go from the West Coast to New York for six months to shape up a team whose manager is inept. Wouldn’t you know that the plum job that could mean a career advancement for Nate occurs just about the time that he asks his steady gal Jessica to move in with him. Wondering whether Jessica would stay loyal to him during the six months’ separation, he asks John to try to seduce her. At first John is dumbfounded but agrees. For a while he is quite pleased the way things are turning out. The wheels turn, the game moves forward, and tensions erupt that threaten to send the entire troupe into soul-searching depression.