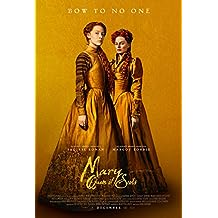 With due respect to Theresa May, David Cameron, Gordon Brown, Tony Blair, and John Major, none of them could hold a candle to Mary Queen of Scots.  They cannot be the focus of an adventure movie like this one, even while wearing their cool, white, parliamentary wigs.  Benjamin Disraeli and William Pitt, maybe. In fact, yes, William Pitt the Younger (movie: 1942) doing battle with France and Napoleon.  OK I’d grant that.  Or could it be just that history itself grants majesty to the people conveyed therein?

There is ample majesty in Josie Rourke’s “Mary Queen of Scots.”  Two majesties in fact, though one wanted to expand her power, and like many leaders, authoritarian and otherwise, met their downfall because they overreached.  If Mary remained content to be the Scottish monarch, all would be kosher, but she provoked her cousin Elizabeth who felt threatened—as anyone in her position would.  Mary believed she was rightfully queen of Scotland, England and Ireland: think of it as office politics with jewelry and makeup.

Mary Stuart (Saoirse Ronan—rhymes with “inertia”) became, in her country in her time, what we in the United States would require a chief exec to be at least 35.  She ascended the throne of France at 16, widowed at 18, returning to Scotland where she finds that Scotland and England are being ruled by Elizabeth I (Margot Robbie).  In Josie Rourke’s version, love becomes as important a theme as power.  Conspiracies abound (Conspiracies: those are the things that American politics today have nothing to do with.)  One branch of Scottish nobles are with Mary.  They’re all for putting her on the throne of England, Scotland and Ireland.  Another faction in Scotland is opposed and favors recognition of Elizabeth.  Naturally the English encourage the faction that wants to quell the competition so that all can live in peace.  But this is not to be, lucky for us, as we can watch a beautifully costumed, made-up, jewel-wearing rival monarchs, though for beauty, Mary has it all.  Elizabeth, afflicted with smallpox as of Oct. 10, 1562, must cover her pock-marked face with increasing layers of white powder—which, by the way, made her ill and caused her hair to fall out.

If you’re a cinephile having absorbed previous attempts to bring Mary to life, you’ve seen Katharine Hepburn in “Mary of Scotland” and Vanessa Redgrave as “Mary, Queen of Scots,” Cate Blanchett and Samantha Morton squaring off in “Elizabeth:  The Golden Age,” and a lesser known “Mary Queen of Scots” in 2013 with Camille Rutherford.  This time directing honors go to Josie Rourke in his freshman movie, but whose qualifications come from his being director of London’s Donmar Warehouse theater company.

Rourke’s version brings the episodes into modern times, portraying at least two men of color among the conspiring nobility, with much warmongering going on among people who might fit well into today’s Tea Party and would be most welcome by Bible-thumpers with political ambitions.  Difficult as it might seem today when all religions in America are living in peace and harmony (granted with some exceptions played up bigly in the media),  Catholics and Protestants are at one another’s throats as they were in recent times in Northern Ireland, with the fanatics playing up the fact that Mary is Catholic and is accused of wanting to smuggle the pope over the border to rule with her.

Forget about the complexities of accession.  Suffice it to say that Mary became Catholic Queen of France and Scotland, Elizabeth the Protestant Queen of England.  Mary comes across as more aggressive in the movie than she may have been in life.  She might have settled at first for the dual monarchy but those Bible thumpers orated against Mary for being not religious enough or at least not caring whether her people worshipped as Protestant or Catholics. (In America today the word is that our great people might not oppose a President who is Jewish, Catholic, Protestant, even Muslim: as long as he or she is not an atheist.)

If the monarchy were to be decided on mere looks, Mary would be accepted unanimously.  Saoirse Ronan is stunning, carrying herself as regal as a woman can be, stretching her terrific acting chops as a woman whose judgment in men is not always on the money. Elizabeth is made difficult to look at once had face is covered with the boils of smallpox, then has her face whitened to cover the scars, and, were it not for the elaborate red rug that she is entitled to wear could scare your children with the impact of that dread disease.  Much of director’s time is taken up with the conspiracies of the males since aside from the two monarchs, the only other women are ladies-in-waiting who at one point stand fretfully at the door of the royal bedroom while Mary tries with her insufficiently excited man to conceive an heir.

This is a picturesque look at the scepter’d isle in the Sixteenth Century, an authentic one so far as anyone but a historian might see, a multi-cultural, feminist drama with the occasional battle scene as two rival Scottish factions wave their swords at each other, though for what purpose one would want to risk his life is beyond the ken of the film.