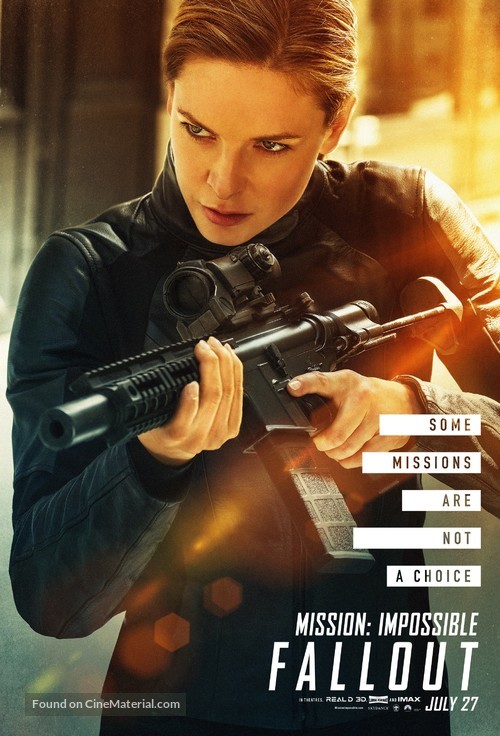 Movies have come a long way since an audience for “The Great Train Robbery” ducked under the seats as the railroad train headed toward them in that historic six-minute film screened in 1903.  Just imagine what the audience, perhaps seeing their first film at the turn of the 20th century, would think if they saw “Mission: Impossible—Fallout”! They wouldn’t be ducking under their seats. They would be shouting and running for the exits, thinking that the end of the world was finally here.  If they stayed for most of the almost two and one-half picture, though, they would not think the world was ending. They would be certain, because the bad guys, who include August Walker (Henry Cavill) as a rogue agent actually tasked with eliminating the good guys, and especially Solomon Lane (Sean Harris), an anarchist with, of course, a full beard, plan to blow up a good part of the world knocking out 1/3 of our population to start.

Lucky for us that Ethan Hunt (Tom Cruise), working for the IMF together with Luther Stickell (Ving Rhames), Benji Dunn (Simon Pegg), and Ilsa Faust (Rebecca Ferguson), is available to make amends for his failure to capture the anarchist.  While many would think his new mission is impossible, the fallout is altogether a happy one, ultimately finding a reconciliation between Ethan Hunt and his wife Julia Meade-Hunt (Michelle Monaghan).

Writer-director Christopher McQuarrie, in his métier having directed “Jack Reacher: Never Go Back” in 2016 (a homicide inspector looks into the case of a sniper who shot five random victims) and is the only one who directed two “Mission Impossible” actions.  At the screening I attended he spoke to the vast audience at AMC Lincoln Square’s IMAX theater, making sure that we all appreciate that Tom Cruise, who does some of his own stunts, injured his ankle during a drop from one roof to another in London, yet without waiting for his foot completely to heal continued to show up for work.  (Work?  This is pure fun.  We all should have jobs like his.)

In a picture with a great many strengths, though plot is not one of them, Tom Cruise leads his team against people out to kill off much of civilization to start “a new order.”  McQuarrie and a cast of hundreds of extras supporting to main characters, enact what some consider to be one of the greatest action movie of all time.  Given the steady march of film technology—special effects, booming sound, motorcycle chases through the streets of Paris that look so real you’d swear  you witnessed the real thing—“Mission: Impossible—Fallout” will impress audiences that are already hip to video games and scores of action features—but I can’t think of a single one that can surpass what occurs on the screen in an IMAX theater.

This sixth installment following McQuarrie’s “Rogue Nation” (Ethan Hunt and team go after the Syndicate, which had been charged with eradicating the International Monetary Fund) opened in Paris July 12, 2018 as well it should be given the City of Lights’ major role as virtually another character.  Don’t expect this to be in any way comparable to the intellectual spy stories of Joh Le Carré though you might compare the story to chapters in books by Ian Fleming, Tom Clancy and Robert Ludlum.  In an opening sequence Ethan Hunt and Benji botch an operation irritating CIA director Erica Sloane (Angela Bassett) forcing Hunt to team up with Luther (Ving Rhames) and the complex character August Walker (Henry Cavill).  In a breathtaking sequence the two jump from a jet like joyous sky divers, their chutes threatening to stay closed even as they are within 1000 feet of Paris’ Grand Palais.

One of the actions exquisitely choreographed is a fight scene in a men’s room between the team and a goon, the action unfolding with a minimum of itchy editing so common to martial arts pics, the realistic punches landing with thuds.  Other adventures involve masks donned by some to conceal their identities, with a great gag involving CNN commentator Wolf Blitzer.  Audience members who may not have traveled much will be treated to the wonders of Paris, but Hunt is not one to sit in a sidewalk café watching pedestrians but is happier in cars and motorcycles charging down the cobblestone streets.  At times that most drivers would be honking their horns at traffic delays, Hunt is able to traverse the streets at 60 mph without knocking down a single civilian.

Other stunts involves jumping from roof toe roof, climbing and hanging on to a rope which Hunt holds onto for dear life as a helicopter takes off,.  All comes to a smashing conclusion in Kashmir (filmed in Norway and New Zealand) as the team of good guys try to defuse a series of bombs set to go off in 15 minutes thereby destroying most of India, Pakistan, Kashmir and presumably the happiest country, Bhutan.

Each episode tops the one before, the movie owning nothing to the James Bond series since every gadget owned by 007 has been largely surpassed by today’s technology.  So: plot is familiar, action is incredible.  The picture deserves to be seen in 2-D on the largest screen available in your area, IMAX if you can get it, but given the length of the film and the annoyance of wearing those pesky glasses I would recommend skipping the 3-D.