It’s about time that the film industry has come around to portraying a first class melodrama of one of the great forgeries in art history, one of many that allowed Hans van Meegeren to amass enough of a fortune to buy 52 properties and 15 country homes throughout Europe. Van Meegeren’s story has is covered in an elaborate Wikipedia essay, a fellow well known to the residents of the Netherlands but until now unfamiliar to the average American. “The Last Vermeer” is adapted from a book by Jonathan Lopez, “The Man Who Made Vermeers,” available on Amazon, now brought to life before cinematographer Rami Adefarasin lenses with all the splendor of Fort Widley in Portsmouth, England and Dordrecht, the Netherlands.

The film should cast Dan Friedkin in the limelight as a first-time director with a potential future in uncovering the lives of people as colorful as Van Meegeren, who thanks to this picture will allow us in the U.S. to dig further into aspects of the Third Reich rarely illuminated before. This film is graced by a stunning performance from Guy Pearce in the role of the forger who must have been thankful that he did not make the cut as a grade-A painter, but who amassed a fortune of thirty million dollars (that’s in 1943) by swindling the number 2 man in Hitler’s stable, art lover Hermann Göring. Implied in the tale is the certainty that if Göring knew he was taken advantage of, he would have had Van Meegeren shot. Then again, some of Van Meegeren’s countrymen might have done the deed given that Dutchmen who collaborated with the Nazis were tied behind a pole in a central square and shot before a mass of citizens screaming epithets.

The two central characters are Han van Meegeren (Guy Pearce) and Captain Joseph Piller (Claes Bang). The movie, like the book, emphasizes the captain’s Jewish background given his disgust with the Nazis for stealing hundreds of masterworks in the art world when Jews escaping the Nazis in the Netherlands as in most of the rest of Europe had to sell their collections for bargain basement prices. Presumably van Meegeren acquired these paintings partly for his collection, but always conspiring to sell them and accumulate vast riches. What Göring did not know was that the painting of “Christ and the Adulteress” that he bought from van Meegeren was not an original Vermeer and that in fact Vermeer had not been credited with the work at all. One must wonder—though the film does not—why Göring could not check on the complete list of the works of Johannes Vermeer (1632-1675) where he would discover that no such title exists.

The film is bogged down by a large number of characters, most if not all might be unfamiliar to American viewers. Otherwise the story involves throughout with several melodramatic touches, culminating in a dramatic courtroom scene presided over the three judges, with the Dutch people gathered outside seemingly favorable to van Meegeren as they credit him with swindling the Nazis. On the other hand the judges and the prosecutor are adamant about prosecuting the forger and giving him a death sentence, as they consider him a fellow who enriched himself by collaborating with Nazi bigwigs.

The women in the story get short exposure, lost in the maze of personages, including the forger’s ex-wife and his mistress, while Piller, a handsome Dutch fellow with a clear, penetrating voice, has his own bedmates. Yet Guy Pearce, well known to American audiences for roles in “Mary Queen of Scots,” “The Catcher Was a Spy” and as F. Scott Fitzgerald in “Genius” takes a role in which he is almost unrecognizable, giving support to Claes Bang, recently seen in the wonderful “The Burnt Orange Heresy,” which also deals with the world of painting.

An epilogue that tries to imitate some of the novels of John Grisham—wherein a winning case unravels in the final pages—is unconvincing, dealing with a suggestion that the Dutch painter indeed collaborated with Hitler himself. 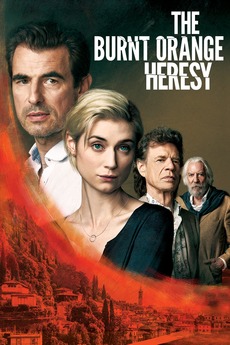 If you visit one of the hundreds of artists’ colonies throughout the world, perhaps Res Artis in Amsterdam, the Alliance of Artists’ Communities in Providence, even the Intra Asian Network in Taiwan, you might expect that the community houses people of like minds albeit all with temperamental personalities. “Final Portrait” will open your eyes to your mistake. The movie is directed by Stanley Tucci, whose busy professional life encompasses principally his acting as in “Submission” (as a professor accused of sexual harassment). Yet he is far from a slouch in the directing department. Consider his hit film “Big Night,” doubling as a actor playing a restaurateur trying to save his business. He does well with “Final Portrait,” though he states in production notes he does not care for biopics. By this he may mean those studies which are plot-directed such as “The Young Karl Marx,” which takes the intellectual founder of modern communism from his job in a magazine through his friendship with Engels and his founding of a troupe determined to restore equity to oppressed workers in all countries.

“Final Portrait” does not have a plot in the usual sense. All scenes take place in an around an artist’s Paris studio, the City of Lights during the year 1964, filmed in a London studio. As a showcase for the remarkable talents of Geoffrey Rush in the role of sculptor and painter Alberto Giacometti, the picture’s thematic focus is on the vast personality differences that Giacometti had with a noted writer, James Lord (Armie Hammer), known today for his voluminous biography of the man he befriended.

“Final Portrait” begins in black-and-white, gradually morphing into color as the characters become better drawn together with the women in the sculptor’s life, namely his masochistic wife Annette (Sylvie Testud) and a vivacious hooker, Caroline (Clémence Poésy). Both men wear jackets and ties throughout, but Alberto’s is of the well-worn tweedy type worn by professors while James spends the movie in a fine suit. For both men no changes of outfit take place throughout since Lord is forced to wear the same suit for eighteen days because of the demands of the sculptor who, this time, concentrates on his painting and uses his friend to sit.

The comedy relies in large part on the way that Giacometti first tells the writer that he would be needed for two days, but that drags on to eighteen, requiring Lord to change his reservations to New York several times. Not that the painting should have required such delays: the volatile Giacometti in frustration twice smeared gray paint across the canvas and redid the face, frustrated for reasons not entirely clear. Nor is it true that he was in want of female company. His wife Annette whines that Giacometti will not spend money on her; that she needs a new coat “not mink” only to hear her husband’s rebuttal, “Who needs more than one coat?” A good deal of money is spent on his mistress Caroline who is with him on a long term basis, the most lively woman in the biopic, even irritating in her extraversion but not a problem at all for Giacometti.

Lord somehow is willing to put up with the painter’s delays, despite advice from the artist’s brother Diego (Tony Shalhoub), not the kind of patience one should expect of a man who is famous in his own right. Then again so far as we know the story is true, though maybe Lord, who is promised the painting which is to be shipped to New York for him may have realized that it would sell in 1990 for $20,000,000.

The two principals play their core personalities against each other, making the characterizations a delight, together with Evan Lucie’s joyful score of French pop from the sixties.