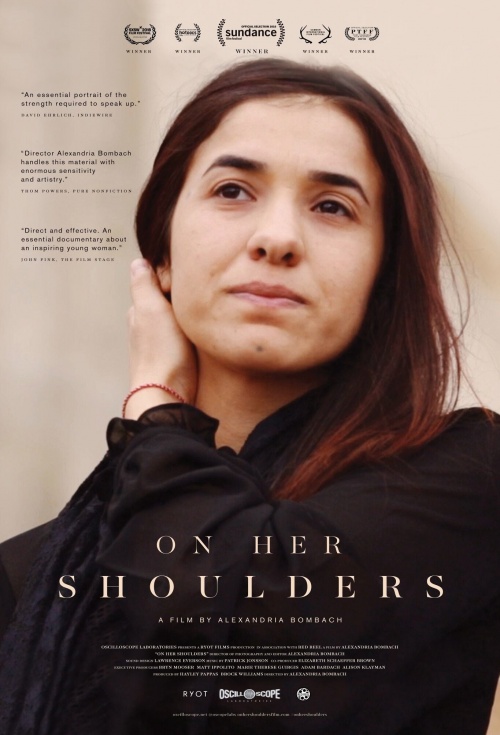 When President Trump viewed pictures on TV of the children killed by Bashar al-Assad’s chemical or biological weapons, he exclaimed “Let’s kill that f—er.”  Earlier than that, during the campaign, he assured the American people that he would wipe ISIS off the map.”  Admittedly the terrorist group has suffered losses, having to move out almost completely from its bunker in Syria, but that has not stopped the group from killing, maiming, enslaving and raping the Yazidi minority in Northern Iraq.  As Nadia Murad, the focus of Alexandria Bombach’s doc “On Her Shoulders,” points out, in her village of Sinjar, the older men and children were destroyed, the women held captives as sex slaves.  One of these women, Ms. Murad, escaped from her captors through a door accidentally left open, was taken in by some of her countrymen, and eventually became the principal spokesperson for the crimes committed by ISIS; a genocide, in effect.  Missing in “On Her Shoulders” is the way its principal subject managed to be swept away from her country to become the leading advocate for information on the genocide committed by ISIS.

For Alexandria Bombach, directing, manipulating the lenses and editing  “On Her Shoulders,” this is her sophomore full-length feature after her 2015 picture “Frame by Frame,” a personal look at four photographers in Afghanistan.  Her present subject, Nadia Murad, received the 2015 Nobel Peace Prize and wrote a book about her dreadful experiences, “The Last Girl: My Story of Captivity, and My Fight against the Islamic State.”  Since embarking on a whirlwind tour of seventeen countries, lobbying for funding to help the people left behind and petitioning the U.N. General Assembly to conduct a full investigation of the war crimes, this woman has given up the chance to live the life of a normal, pretty woman in her early twenties but relishes her role in the public eye.  This is not to say that despite her generally stoic composure she never lets loose with tears whenever describing her own rape and her witnessing of the mass murder and enslavement of her people.  Bombach captures the subject’s emotions in close-up and in shots that find Nadia addressing a full session of the General Assembly, wearing a headphone to receive translations into Kurdish and Arabic wherever necessary.

She teamed up with Murad Ismael, a founder of Yazda, which is a group advocating for the Yazidis.  The two cry out for no more talk and a lot more action, and perhaps their championing of the fight to destroy ISIS has met with some success, given the aforementioned displacement of ISIS from most of Syria.

Bombach’s broad sweep takes us to refugee camps in Athens and Thessaloniki where Murad chats with Luis Moreno Campo, first prosecutor for the International Criminal Court.  We find that the refugees will likely be split up among countries willing to accept them just as some of the Lost Boys of Sudan were relocated to the U.S. The bad news is that the spreading out of the Yazidis among several countries could spell the end of the community whose half million followers will no longer be able continue the cultural traditions allowed in a single state.

Bombach edits carefully, merging several meetings and speeches of her brave and dignified subject, asking us in the movie audience to hear the same morbid story over and over—undoubtedly more wearying for Ms. Murad than for the target audience of progressives who will catch the documentary when it opens Oct. 19.  Traditional entertainment value embodying animation and special effects are absent, likely affecting word-of-mouth of the initial film audiences and discouraging those whose political literacy nonetheless requires flashes of melodrama.  We hope that more docs of this nature are in the works, particularly now when the Rohingya people are regularly persecuted by Myanmar’s military.

It’s the old story: during times of extreme nationalism, majorities in countries often consider smaller groups to be “the other.”  Yazidis in Iraq; Jews, Romani and Jehovah’s Witnesses in Nazi Germany, Armenians in Turkey in 1915, Muslims in 15th Century Spain.