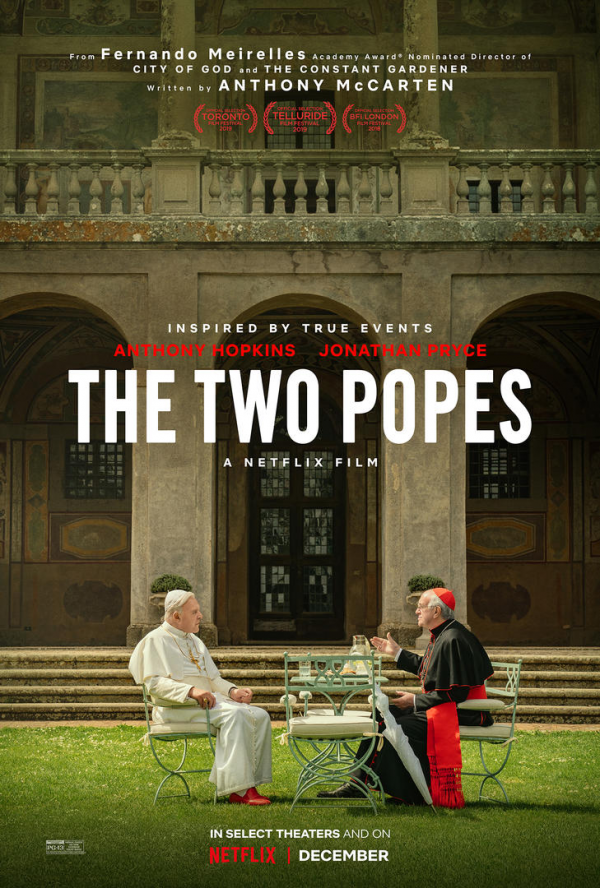 Much of the humor of Fernando Meirelles’s fictional encounter between two popes whose ideologies are almost polar opposites comes from what Pope Francis and Pope Benedict XVI did for amusement. Audience laughs purportedly come from the mysterious idea that “Wow. These heads of church are not gods, they’re not saints, they’re human.” For example in one scene they shares a pizza. Imagine that! In other we see Pope Francis (when he was Cardinal Bergoglio) watching soccer and rooting for his home team from Argentina. And Bergoglio even tells a joke. A follower of the church asked whether he could smoke while praying. “Of course not,” replied the church official. Then he was advised that the question needed re-framing and became “Can I pray while smoking?” The answer presumably changed. It’s how you express yourself that counts.

Brazilian born director Meirielles follows up his famed “City of God” (2005) about two boys from the Rio slums whose paths diverge, just as Bergoglio and Benedict could be said to argue from different opinions. And writer Anthony McCarten (not my Irish cousin) takes off from “The Theory of Everything” encompassing the differences and similarities between Stephen Hawking with his wife. So what is “The Two Popes” about? It’s mostly about performance. We watch two veterans of the cinema Anthony Hopkins as Benedict and Jonathan Pryce as Bergoglio meet. What do they talk about? Does either fellow change his opinions based on the chit-chat? Benedict is Bavarian, a status quo pope, whom some people might consider a reactionary given that he wants to go back to the Latin mass (which, by the way, Mel Gibson prefers). By contrast Bergoglio, an Argentinian, emphasizes the needs of the poor while serving as the Holy Father. He even carries his own luggage (like Jimmy Carter), does not live in the Vatican, and visits Lampedusa to welcome the African refugees.

What is not emphasized, however, is that they agree on the basics. Meirelles and McCarten glide over the fact that Bergoglio, as Pope Francis, endorses the usual views on the Catholic Church against divorce, homosexuality, clerical marriage, abortion and contraception. He is, however, more forceful in dealing with priests who stray by exploiting their choir boys, but even there we don’t hear much about this.

The most trenchant archival film puts us up close to the brutality of the Argentine military after a coup under which opponents disappeared, were tortured, kidnapped, placed in secret concentration camps. The film suggests that since Bergoglio as a high church official was silent during the reign of military dictator Jorge Raphael Videla, he feels so guilty that he asks the pope for permission to resign from the church. For his part, the conventional Benedict is about to make the most unconventional decision to retire from the papacy, the first time in some seven hundred years that such an action would occur. Whether he was burdened by any guilt for serving in the German military during the World War 2 some time after being drafted at fourteen into the Hitler youth is glossed over. The bottom line is the big surprise: that Benedict, knowing the liberal views of the man who succeeded him, refuses his offer to resign and suggests that Bergoglio get right into the running of pope following Benedict’s retirement.

You might want to take the civilized interchange between these two larger-than-life people as a sign that the nations of the world which appear to have irreconcilable differences might actually come together in compromise, or even the more unlikely idea that Republicans and Democrats would become the tweedle-dee and tweedle-dum that they used to be when I was a kid.