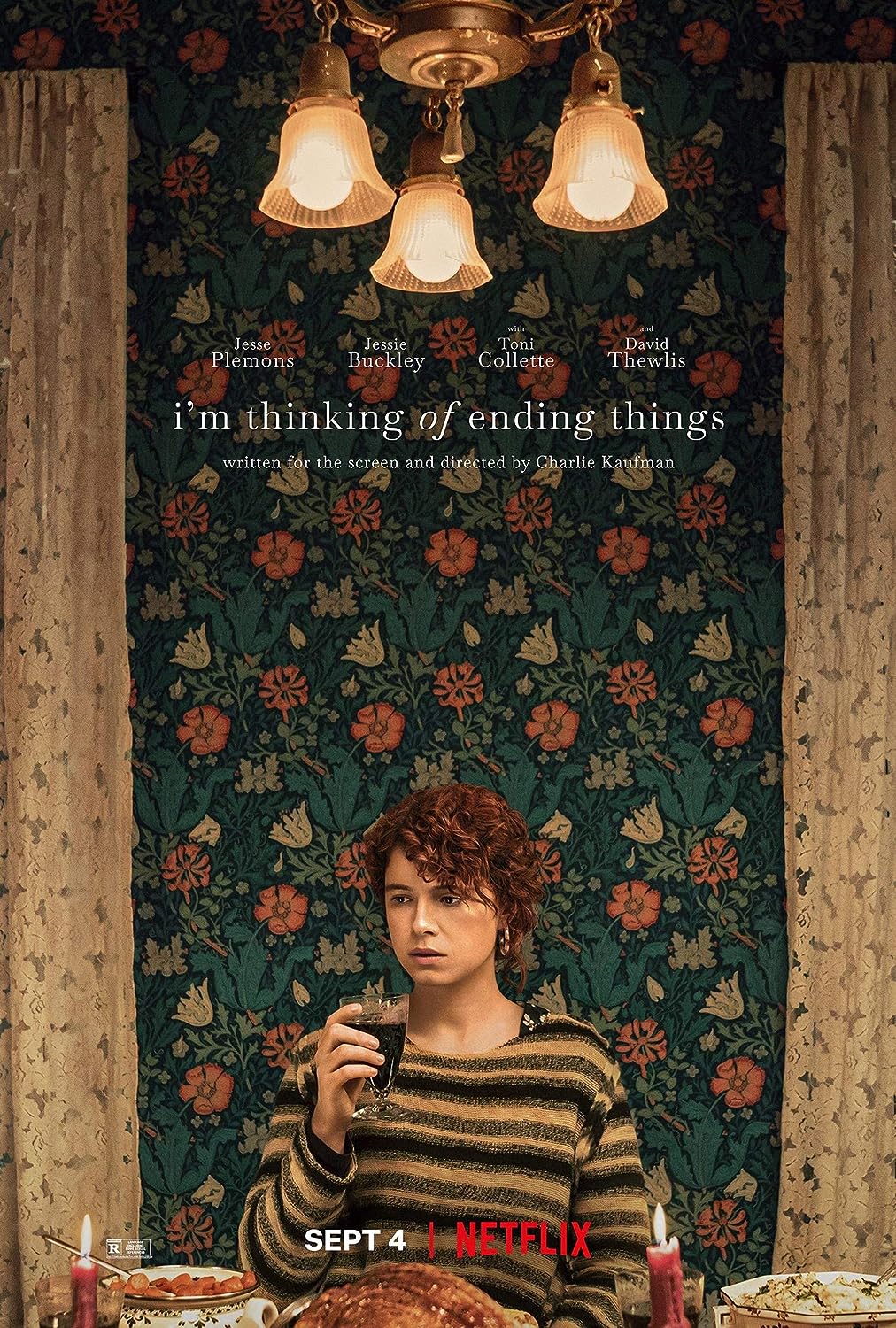 A surreal film associated with Charlie Kaufman’s wild imagination comes from a director whose “Anomalisa” hones in on a man who cannot continue tolerating his mundane life, whose “Synecdoche New York” find a man’s creating a life-size warehouse of New York City, and whose script for “Being John Malkovich” lauds a puppeteer who finds a portal leading into the head of the title actor. All are works of a fervent imagination, but perhaps no other film of his has issued such a large amount of moviegoer puzzlement than “I’m Thinking of Ending Things.”

With that as the case, here is a disclaimer. This is my interpretation, one that may be attacked by critics and normal people as too easy; that Kaufman must be traveling a larger road.

Here is a way to think about the picture. Many say that folks on their deathbeds asked for their regrets will never say “I wish I had more time to spend in the office.” Real regrets are far more serious, as illustrated by this film. Here, an elderly janitor (Guy Boyd), a man who is surprisingly well read for someone in his low-skilled trade, may be facing his mortality. He puts down the mop, casts aside the pail, and, being the only character in the hallway of a large high school, he has the time to reflect.

Some of his regrets may be strictly a segment of his imagination. I believe that, allowing for some embellishment, his thoughts run to actual events in his life, something like those of Guido Anselme in Federico’s 1963 classic “8 ½” who retreats into his memories and fantasies. In his younger days he probably dated a number of women, all of whom congeal into the shape of Lucy (Jessie Buckley), or Lucia, or Young Woman. To prove that she is a composite, she is introduced as a painter, a poet, a physicist. The janitor, now in the guise of young Jake (Jesse Plemons), is driving his girlfriend Lucy to the farmhouse of his parents, Mother (Toni Collette) and Father (David Thewlis). It’s a long drive, it’s snowing heavily, the wind is biting. It’s the kind of night that may be part of Jake’s imagination, because what woman is willing to take her chances in such inclement weather when the trip could have been set for another day? What’s more, this may be the last time Lucy sees Jake, her boyfriend for only a few weeks, though he is a man who is mostly self-educated as shown by the books and movies in his childhood room. He is able to discuss Wordsworth and analyze any 19th century poem.

She is smart and well educated, able to respond to him. You might think, then, that they would wind up marrying but though Lucy sees Jake properly as an intelligent person, a nice guy, he is stiff, a bore, a man who probably could not see himself laughing out loud at a joke or telling one himself. Furthermore Jake’s folks are a bizarre couple. Mother laughs too loud and too long. Lucy reports that “Jake told me a lot about you.” She replies, “And you’re willing to come anyway Ha ha ha ha!” Father takes a lesser role in the conversations but like Mother, he disappears into old age and back again, while Mother in one scene is on her bed, wrinkled, taking her last breaths or already dead.

Since much of the movie is a road trip filled with both high-level and vapid conversation, we get to meet three women tending an ice cream bar, two bimbos and one who advises Lucy to “go forward.” In a scene near the conclusion, Jake is thanking everyone in a theater audience for being part of his life, including Lucy, above all, who now appears decades older, and even the bimbos from the ice cream shop are in attendance.

Some moviegoers might say, if this is a dream, I can tell you a weird one I had myself last night. But though fantasies hover around the truths, these are actual people in his life, important ones, also those he conversed with for only minutes. However, what makes “I’m Thinking of Ending Things” on a quality level of classics like “8 1/2” aside from the script, the prescient editing, the spot-on direction, is the performance of Jessie Buckley, who dazzles throughout. She has wowed the movie audience playing Queen Victoria with authenticity in Stephen Gaghan’s “Doolittle,” a troubled woman controlled by her family while at the same time fascinated by a man who could be a killer in Michael Pearce’s “Beast,” and a major role in Rupert Goold’s “Judy.” Her dynamic range includes song, as shown in Tom Harper’s “Wild Rose,” as a Glaswegian dreaming of becoming a country music star in Nashville.

With such talent all around, it’s no wonder that “I’m Thinking of Ending Things” is my choice, so far, as best movie of the year, with Buckley as best actress.

The most salient feature of “Made in Italy” is that the conflict between father and son is acted by the tale’s actual father and son. This is not unusual: you’ll find similar examples in Peter Bogdanovich’s 1973 feature “Paper Moon,” in which Ryan O’Neal and his real daughter Tatum play out a Depression era film about their partnership. Closer to the “Made in Italy” theme, Kiefer Sutherland portrays a bitter gunslinger, John Henry Clayton, who attempts to make amends with his estranged father Reverend Samuel Clayton (Donald Sutherland), while their community is besieged by ruthless land-grabbers.

If you have ever had not just a disagreement, but more closely a situation in which your conflict with your parent emanates from a lack of emotional closeness, you will relate strongly to “Made in Italy.” As filmed by Mike Eley in the gorgeous Tuscany town of Montalcino in central Italy—perhaps one of the best places that a father and son can work out issues of emotional distance—we see that Robert (Liam Neeson) has not been the most honest and direct guide for his son Jack (Micheál Richardson). (Micheál is the actual son of Liam Neeson and Natasha Richardson, the story poignantly reviving our memory of the actress who died tragically in 2009 of a head injury while skiing on Mount Tremblant in Quebec. Micheál one of the couple’s two children.)

The story kicks in when Jack, who made a great success managing the art gallery in Britain owned by his wife Raffaella (Helena Antonio), determines to buy the place at about the time the two are finalizing their divorce. Raffaella allows Jack one month to raise the money, which Jack expects to have after he and his dad, each with a half ownership of a house in Tuscany, find a buyer. They discover that the place is a wreck, though filled with memories of Jack’s mother. And what better time for a dad and his twenty-five-year-old son to get to know each other than by taking a road trip, then working together to fix up the dilapidated structure to make it salable? We learn that Jack and Robert have barely spoken with each other for years, and more importantly, that after Jack’s mother died in a car accident, his father sent him away to boarding school as though unable to establish a closeness that such a tragedy could engender.

During their time painting together, fixing up the place, and entertaining prospective buyers, Jack meets Natalia (Valeria Bilello), an accomplished cook who runs a booming restaurant and who wins the hearts of both the young man and his dad by cooking a dish that the two men call “amazing.” (Aside: if you did not have the delightful experience of traveling in Italy, you may not realize that there is no such thing as a bad meal anywhere in that country.)

The film is written and directed by James D’Arcy in his freshman narrative film, the London-born gentlemen having a large résumé of acting roles including that of Colonel Winnant in the spectacular war movie “Dunkirk.” If you can’t get a bad meal in Italy, you’d have difficulty finding a bad performance from Liam Neeson. The big news is that his son Micheál Richardson, with two more movies announced this year and who performed with Liam Neeson in a leading role in the revenge picture “Cold Pursuit,” does such a good turn here that you’d think he was emoting with his real dad!

The story can be sappy and the plot thin, but the picture is a keeper for the sumptuous scenery and a particularly vivacious turn from Valeria Bilello as the bilingual chef. Try not to envy the folks on the night that she served a full house of happy diners, talking, laughing, and eating magnificently.