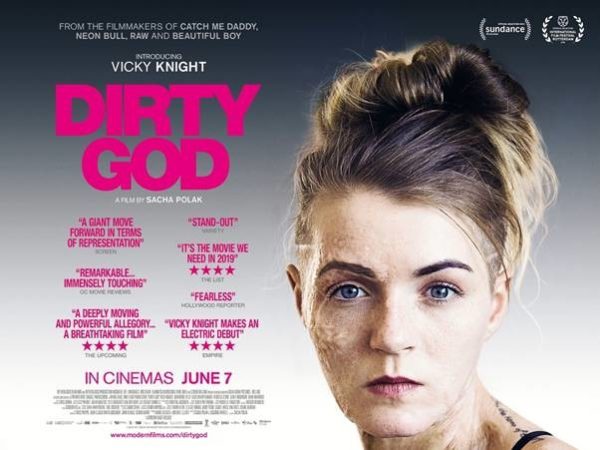 Big surprise: the poor get shafted. Unlike the title character in Dutch director Sacha Polak “Hemel” who in the end finds true love , Jade (Vicky Knight) does not fare as well. Not only did she pick the wrong boyfriend who, after leaving her with a two-year-old child, disfigured her face and chest by throwing acid at her. She is disrespected by her mother Lisa (Katherine Kelly) who often has to take care of Rae (Eliza Brady-Girard), the toddler. Jade is red meat to the types of scammers who go after the elderly, the desperate and the ignorant; and she is given the cold shoulder by the hospital which, working under the cash-strapped National Health refuses to give her the additional plastic surgery that she deserves.

In a promising debut performance by Vicky Knight, who herself is disfigured but is made worse by the film’s makeup department, Jade gains some support from her best friend Shami (Rebecca Stone), an extrovert whose gentle boyfriend Naz (Bluey Robinson) also has had carnal knowledge of Jade knows . He knows what to say: when Jade blames a “dirty God” for her troubles, Naz notes that God had nothing to do with her concerns. The guilty party has been sentenced to a long term in court. But Jade needs more attention than she is able to get post-acid attack and turns to chat sites that are only somewhat comforting but mostly humiliating. The chat sites, however, are a piece of cake compared to one that advertises cheap plastic surgery in Marrakesh.

What more can Jade do to deal with her disfigurement? In one scene that would be comical if it were not sad, she wraps herself in a niqab to resemble Britain’s Islamic women, dancing about while covering her scars completely.
As a further sign that the poor do self-destructive actions that keep them in their unenviable cast, we see that Jade’s mother Lisa looks no more than seventeen years older than she, a condition repeated by Jade whose two-year-old is going to have a young mother if she’s ever around, and whose culture will doubtless be imitated by Rae some fifteen years from now.

Despite her immaturity or perhaps even because of it, Jade becomes a likable person, one that might tempt us in the audience to shout to her that she can rise at least somewhat out of her social class with just a few changes. If British director Ken Loach may be the foremost diarist for the working class, noting its inhabitants’ alienation from society, then credit Sacha Polak with offering a look at the underclass, whose members appear to lack any understanding of politics and are clueless about how to do better. Perhaps Jade needs the counsel of Professor Henry Higgins, whose tutelage gets a street flower seller to pass for a princess.